Helena – After a couple of long days of brutal coverage and attacks on wealthy East Coast developer Matt Rosendale for signing under penalty of perjury that he was a Maryland resident to get a tax break in 2015, it’s safe to say Matt Rosendale is glad it’s Friday. 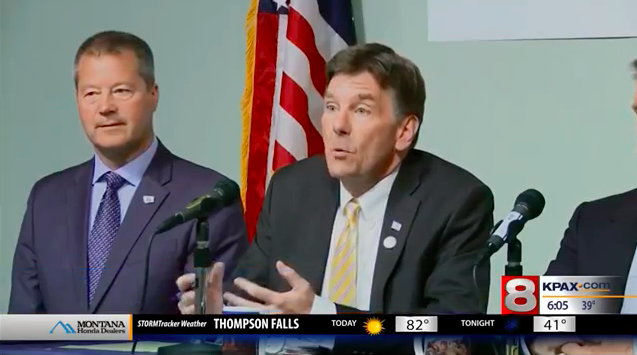 Roll Call: In 2015 — a year after losing the Montana House race — Rosendale’s signature appeared on two forms that had boxes checked indicating he was a Maryland resident. The forms were related to the sale of a 25-acre property in Maryland.

MTPR: “‘Yesterday we learned that Matt signed, in 2015, some tax records under penalty of perjury that he was a Maryland resident.’ Fagg is referring to a report from the Helena Independent Record which showed that Rosendale had signed a tax form related to a real estate sale indicating he was a resident of Maryland, not Montana, where he lived at the time.”

Helena Independent Record: When the deed was recorded, it included two forms…signed by Rosendale and later filled in by the title company to indicate Rosendale was a resident of the state of Maryland…the form says that under penalty of perjury, the signer has examined the declaration made on the form and to the best of their knowledge it is true. The form was signed by Rosendale…

Helena Independent Record: …Rosendale signed, under penalty of perjury, a real estate sale form that was, according to his title company, later marked to indicate he was a Maryland resident.

Montana Post: Shouldn’t [Rosendale], as a real estate developer, have known the details about a real estate deal? Given that the only reason someone would sign this document was to claim a tax break, why did he do it? Shouldn’t the people of Montana be able to expect that a Senator or State auditor would be careful about reading and signing a document before committing perjury? Even if a title company wants to take the blame for this mess, Rosendale is the one who signed the document and Rosendale is the one who is responsible.

Associated Press: Former District Judge Russ Fagg was the most aggressive of the four candidates. He repeatedly went after State Auditor Matt Rosendale…Fagg questioned Rosendale over 2015 documents related to a property sale that listed Rosendale as a Maryland resident.

Montana Cowgirl: A seasoned real estate developer like Rosendale surely knows what kind of forms need to be filled out for a real estate sale. And any person who’s ran for public office as much as Rosendale knows not to just sign forms with the words “perjury” on them willy-nilly. It seems Rosendale did it anyway. That leaves us with two options: 1. Matt Rosendale is lying. 2. Matt Rosendale is so dense he doesn’t understand what forms he signs. 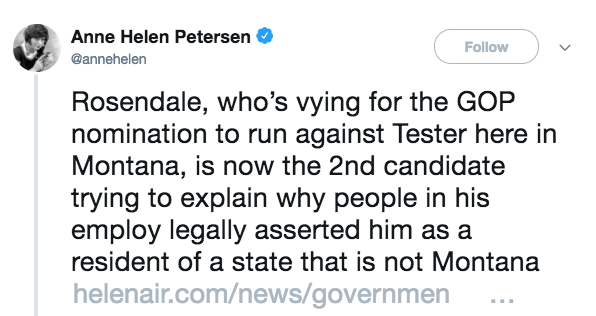